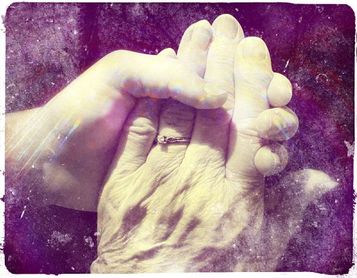 If the body could speak, what would it say?

The body reflects our thoughts, emotions and spirit -- my hands have intuitively felt this for as long as I have practiced massage and acupressure. A stiff shoulder carries the weight of the world, a locked jaw holds unspoken words, an injured disk reflects a lack of support.

Could this body language be revealing the subconscious mind, and could it possibly hold a key to the healing process itself?

Several years ago when I began my private practice as a holistic health educator and massage therapist, I attended a workshop called Alchemical Bodywork. Although I couldn't imagine how hypnotherapy could relate to a bodywork practice, I was intrigued with alchemy, which I understood (from reading Carl Jung) could be interpreted as a metaphor for "transforming lead into gold" in a person's consciousness.

The benefits of guided imagery

That workshop and subsequent training showed me that using hypnotherapy (guided imagery and positive suggestion) with bodywork is very effective -- because usually the person receiving touch is already in a light trance, or alpha state, where there is deep relaxation, heightened suggestibility and receptivity to the subconscious mind (this actually is the definition of a hypnotic state). Hypnotherapy provides tools to deepen relaxation and be in deeper touch with intuitive knowing, which empowers the person receiving a session to find his or her own meaning in the body's symptoms and to find self-healing images. Hypnotherapy and guided imagery lends itself to many kinds of bodywork, such as soft and deep tissue massage, acupressure, and more subtle kinds of energy balancing that work with the chakras or the body's energy field.

Milton Erickson, an M.D. and a pioneer in the field of hypnotherapy, taught at Wayne State University in the 1940's and subsequently had a private practice using hypnotherapy until the time of his death in 1980. His case studies described in Jay Haley's book, Uncommon Therapy, illustrate that the subconscious mind is deeply intelligent, and can be accessed in a hypnotic state for healing and creative problem solving. I chose to study Ericksonian hypnotherapy because it is magical and evocative, and trusts the resourcefulness of the client.

As I practiced combining bodywork with hypnosis I discovered it is enjoyable, relaxing and sometimes even a sacred and revelatory experience for the client.

It is important to note that massage practitioners wishing to use hypnosis professionally need to complete a hypnotherapy certification program in a state-approved school. This gives professional preparation in hypnosis for improving performance, enhancing wellness, managing stress and accessing creativity. In order to use hypnosis in conjunction with physical illness or emotional or mental disorders, a practitioner must either be a licensed health care provider (such as an M.D. or a psychologist), or be supervised by one.

I eventually went on to become a trainer of Alchemical Hypnotherapy, and it became clear to me that the possible applications of hypnosis and bodywork were endless. I began to teach and practice my own version of Alchemical Bodywork, called "Changing the Body's Mind." In cases of chronic illness or disease I found several doctors who supported my using hypnotherapy and bodywork as an adjunct with their patients. My sessions always encouraged a client to access their own healing resources which complemented the medical treatment plan. The following case study illustrates this process:

Ruth was experiencing chronic myofascitis (soft and connective tissue inflammation) in the right shoulder joint and was also diagnosed with carpal tunnel syndrome. She had worked as a hair stylist for more than 20 years, and recently it had become increasingly difficult for her to work. While giving her a session of soft tissue massage and acupressure I asked her permission to use some alchemical techniques to imagine taking a mental journey into the injured shoulder to see what was there.

Trance states allow us to be much more open to our imagination, somewhat like a conscious dream. Ruth was very receptive and easily discovered images and feelings in her shoulder. Much to her surprise, the "guardian" of this body part appeared. It looked like a small comical robot, who was quite rigid and kept repeating, "I just do what I am told. I don't know how to relax. I'm just here to be efficient and get things done." I encouraged Ruth to appreciate this little "fellow" who had been working so hard for her all these years to support and protect her.

However, as Ruth began to do this she said, "It was as though the robot's mask fell away and I saw my mother underneath telling me, 'You've got to work hard all the time. Life is a struggle'." Ruth was then able to honestly confront the internalized mother and share some deep feelings with her.

After that her shoulder felt more relaxed and open. As I gently massaged the shoulder muscles, Ruth imagined escorting her mother out of her body. Then I asked her what the robot was doing. "Oh," she said, "it's not a robot anymore. It's become a magical elf. I seem him curled up in my shoulder. He knows how to relax."

This was a remarkable healing image Ruth had accessed, because she had been told by her physician that she would have to pace herself and relax more, or probably face surgery. She owned her own business and could take time off, but until then she had been compulsively driven to work constantly. I suggested to Ruth that it would be easy for her to pace herself, and that with the help of the little elf in her shoulder she could balance work and relaxation until her shoulder and hand were better. Ruth later told me that this process had deeply affected her, she had taken some time off, and her arm and hand were feeling much better.

Hypnosis utilizes clients' own resources for healing. I am always amazed at clients' ability to find what they need in their inner world. Metaphors empower people to find solutions to their problems in unique and creative ways. Guided imagery can also be used in massage for deepening relaxation. As every body worker knows, for some people relaxation is easy and feels natural, while for others it is difficult to let go of tension even during an excellent massage. A gentle suggestion such as, "While I massage your forehead you can go deeper into a relaxed state," can greatly increase the effectiveness of a massage. Most of us spend so much time in the outer world tensing ourselves up for the "battles" of the day in a fight-or-flight response to the world that stress management actually needs to be taught. Hypnosis and bodywork provide the perfect combination for learning deep relaxation skills.

Positive imagery, such as visiting a safe, beautiful and natural place where one experiences the healing sound of a waterfall or the peace of an ancient redwood forest, can add a profound dimension to a massage. Nature seems to connect us to a deeper sense of peace and self, and guided imagery often inspires us to actually take more time to be outdoors and experience nature.

Hypnosis can also be used to improve performance or become more creative.

A client named Tim was referred to me for massage and hypnotherapy. He wanted to learn how to relax and alleviate chronic anxiety, and to overcome a creative block in order to write music again. A medical exam had revealed that he was in excellent health except for a tendency to be asthmatic, which was also exacerbated by anxiety.

After a few sessions of massage and deep tissue work, we did bodywork and hypnosis. I asked Tim to imagine a room in his heart area. He entered the room and found a lead box. Inside was a teenager who felt ashamed. A guard patrolled the lead box and said to the teenager, "I'll never let you out. You don't deserve good things. You're stupid, and you never do anything right." Interestingly, Tim defended this guard. He said, "He has protected me for a long time. If I hadn't had this guard I would have gotten into a lot more trouble."

In subsequent sessions Tim got in rapport with the guard, who began to soften and relax. Eventually the guard let the teenager out of the box with the condition that the teenager use his newfound freedom to be creative. Soon Tim set up his keyboard again, and he has been composing, writing lyrics and recording music.

Tim's experience illustrates that one of the magical aspects of alchemy is that it honors the positive intention of all of our inner parts -- even the darkest ones. In this way, all aspects of the self which have become fragmented or hidden can be owned and brought out into the open.

Alchemical bodywork provides a way to dialogue with the body and rekindles the imagination of the "inner child". Through imagery and listening to the body, symbolic meaning is revealed.
When the images are transformed to be aligned with the client's present needs, it seems to effect positive behavioral change in the outer world as well as more trust and relaxation.
Adding hypnotherapy skills to a bodywork practice provides a profound tool for practitioners who literally want to add another dimension to their practice, and for clients who want a holistic bodywork experience