HEALING VIOLENCE OF THE HEART 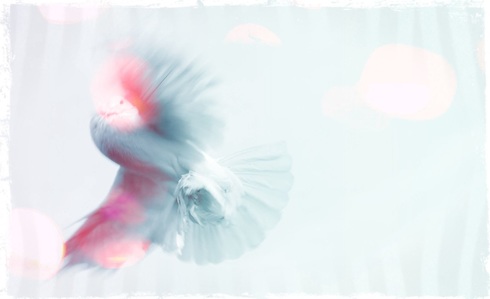 At the time when I first met David Quigley, fighting, abuse, and pain wracked my home.

I was on the verge of getting a separation from my husband, and at the same time I felt that I was destroying my family and everything that we had both worked so hard to accomplish for so many years. It was very painful to say the least, but it was becoming my reality. Worse yet is facing the fact that my partner was not the only monster in the house, but that you I had a share in the blame.

This was the time when I began to realize that we needed professional help, as many couples do. My husband and I decided to get that help. Two different doctors diagnosed my husband with Post Traumatic Stress Disorder: the result of a very sad accident that he had when he was only 13 years old. I had suspected all along that this incident was the core cause of his many "bad mornings", his verbally abusive behavior and his explosive outbursts of anger and rage.

Now my question was, what lies at the core of all of my frustrations and craziness? Was it the fact that I had been molested as a child? Was I only reacting in response to my husband’s behavior? Or was it something else that I had no clue about? In any case, living around me wasn’t easy either, we were tearing each other apart, becoming more and more distant from one another, and making our children’s lives miserable.

Conventional marital therapy seemed to be doing us more harm than good.

Each session seemed only to dredge up more and more ugly incidents from the past, the memories stinging like fresh wounds, and yet this therapy offered no resolution, no method of healing. In fact, after one of these therapy sessions, I decided to leave my husband for good.

But what about our children? Didn’t they count? Was I to make them choose between parents? Hadn’t our arguing caused them enough pain already? At this point my husband was ready to do anything to fix our marriage, and even though I felt very hurt and unhappy with my own situation, I knew I had to go along with his idea of fixing our problems.

Obviously, doctors, medications and conventional therapy had not helped us, so my husband started to look elsewhere for answers. After long hours of searching the internet, he learned of Mr. Quigley’s innovative hypnotherapeutic techniques, I immediately knew that we must try to seek his help. We both felt very fortunate to learn that one of his Empowerment Intensive therapy sessions was scheduled to take place in our area on the following weekend.

My daughter’s birthday was coming up, and with many tears in my eyes I said to her: "Sweetheart, the best present that I can give you for your 16th birthday is to give you a new life, a new start and a happy home".

On the following Friday morning we met David for the first time. We had never been through any similar therapeutic sessions before, and did not know what to expect.

All we knew it was that we were ready for anything; as we had committed ourselves to give our full energy and attention to whatever the weekend had in store. We all got together at 9 o’clock, there were nine persons in our group, including David.

For a moment I was expecting a time of lecture and judgment, a time when we would be torn to pieces for not being good to each other, a fire and brimstone sermon. Instead we started with a beautiful chanting, holding hands and singing together. What followed I would have never expected, it was a most amazing weekend - three days of intensely powerful work with strangers that had suddenly become trusted friends, with the whole of the group being actively involved in the drama that unfolded as each participant in turn faced the issues that he or she needed to address, the result being that each member’s work had a profound impact on all members of the group.

At last I could see why I was so angry and vicious I had become ever since my childhood, I previously had no idea that the memory of one event had caused me so much pain, so much hate, resentment and anger throughout my life, a memory in which I was not the victim, but the witness and the observer. It related to my two older brothers being viciously beaten with a rope by my grandaunt. I watched and cried in hopelessness, seeing my brothers getting hurt by this woman. Then with the group’s help, we stepped in and rescued both of my brothers in an act of courage, joy, and resolution.

During this weekend with David I began to realize that I had been throwing all of this misplaced anger into my relationship with my husband, never understanding what the true roots of my pain, fear and frustration were.

I soon learned why David call his process "Alchemical Hypnotherapy": Like many techniques found in conventional therapeutic methods, it helps to root out and uncover hidden core issues that may have been negatively influencing us for years, but unlike conventional methods, which are successful in exposing old traumas, but do little or nothing to heal the pain, David’s "Alchemical Hypnotherapy" has the magical effect of turning psychological lead into gold, by helping participants to create positive "memories": mental images that serve to cancel out the traumas that were the source of so much unhappiness and pain.

Once we discovered and dealt with many of our core issues in that workshop, my husband and I were able finally to move on, and have since enjoyed a love and closeness greater than we had ever experienced in our eighteen years of marriage. For that we both thank David Quigley, for giving us our lives back. I can’t even begin to tell you of the magnificence of "Alchemical Hypnotherapy", and all of the benefits we have enjoyed; I can only tell you that I am most grateful and impressed by this program, and that I personally recommend it to everyone.

and have since enjoyed a love and closeness greater than we had ever experienced in our eighteen years of marriage. For that we both thank David Quigley, for giving us our lives back. I can’t even begin to tell you of the magnificence of "Alchemical Hypnotherapy", and all of the benefits we have enjoyed; I can only tell you that I am most grateful and impressed by this program, and that I personally recommend it to everyone.