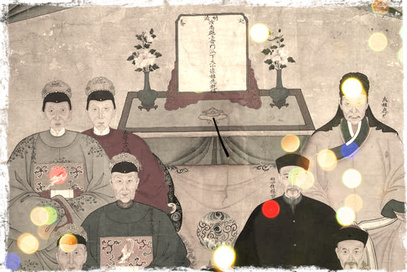 Maybe there's more than one of you in your mind. This simple hypothesis is the basis for what may be the most exciting part of the Alchemical Process -- the Conference Room. In our society we humor the very young or the very old who carry on conversations with "imaginary" people. Mostly, though, we're supposed to act "grown up" and not talk to ourselves lest we get slapped with a label such as schizophrenic. As adults we are all expected to know that we are just "one person."

If we're the only one in here, though, then why is it sometimes so hard to stick with our decisions or to discard a bad habit? How often do we hear endless dialogues in our heads telling us what we should believe, think or do?

The essence of Conference Room Therapy is to provide us with the insight to see where are all the little voices in our heads are coming from, and learn to work with them to make our lives more consistent...and more successful.

With the help of a trained Alchemical Hypnotherapist, we can be transported through the regions of our subconscious minds, to sit around our "Conference Room Table." Once at the Conference Table, we can hear all our "Inner Personalities" express their respective opinions about whatever issue we are dealing with and we can come to an agreement or "contract" which allows our inner characters to work smoothly together.

Any issue of immediate importance in our lives is an ideal subject for this technique. Some typical topics include love relationships just beginning or changing, career direction, attitudes towards sex or money, loneliness, cigarette smoking, overeating and other addictive behaviors. The array of characters we encounter within is as varied as all of us are. Sometimes Conference Room begins with a conflict between the client's conscious mind and a single repressed sub-personality.

For example, one client, whom I'll call Bob, came to me in a suicidal state after his girlfriend of two years left him over a drunken fight they'd had the night before. We were able to discover an inner character, "Macho Bob", who felt that the way to be a man was to become proficient with guns and to get drunk. Actually, in his life, Bob was staying home cooking, cleaning, and taking care of the girlfriend's child while she went to work. He was also a writer and poet and had been consciously cultivating his more sensitive side over the last few years. He was then 47 years old. Meanwhile "Macho Bob" was feeling so suppressed and emasculated that he began surfacing through explosive displays that scared both Bob and his girlfriend half to death.

Simply meeting "Macho Bob" face to face was a major breakthrough in Bob's life which allowed him to seek help with his drinking problem at a local AA group. As Bob has continued with the Alchemical Process and has allowed his inner characters to express themselves in the Conference Room, "Macho Bob" has been transformed. His new role in the client's life is of tremendous value: he supplies Bob with the strength to refuse alcohol. Through open discussion with all the members of the Conference Room Table, "Macho Bob" has learned a new way to feel like a "real man." Thus, through the integration of his opposing inner "selves" who had been fighting for control and filling his life with conflict, Bob was able to reach an acceptable resolution and virtually start a new life. As David Quigley has written in Alchemical Hypnotherapy, "There are no limits to what the human will can achieve once the disparate elements of the human psyche are united behind a single purpose and external controlling influences are eliminated. This is the meaning and this is the power of the Conference Room!"

>> Back to Introducing Alchemical Hypnotherapy