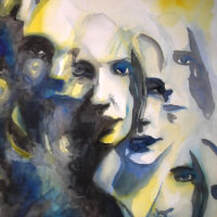 ​First l want to acknowledge many cancer and other medical treatments can be quite lifesaving!  I thank heroic, dedicated and skilled doctors like mine for their gifts.  I have friends who are alive because of you.  Me too.

But here's the problem:  Even though scientific proof has been there for many years about the true causes and the simple inexpensive cure for cancer, the medical treatment focuses on the pharmaceutical industry and its tools, and drug-oriented medical research.  There’s a lot of profit in drugs and surgeries, far outweighing any profit from nutritional advice or herbs.  Billions of advertising dollars are spent to keep the truth from us, especially in the lucrative cancer treatment industry.

And, related to that problem is the now commonly held assertion that cancer is genetic.  The oncologist says you inherited the propensity and that's all you need to know.

No one asks the obvious questions: How is it that a disease that was extremely rare for generations of well documented medical research suddenly turns into an epidemic in two generations - because of genetics?  How come this "genetic disease" assaults us suddenly en mass to now be the third largest killer in the USA?  We can believe the science.  Or we can believe the mythology of the cancer treatment industry.   It is crucial to read the scientific research that the government and cancer industry would rather we never read.

Three elements are ignored by the profit driven cancer industry which should be addressed in any effort to cure cancer:

All three of the above factors must be addressed in order to declare a cure for cancer.

Toxic Environment: Cleaning up the increasing toxicity of our environment is a priority.  Only a revolution will stop the destruction of our planet.  If those in power are allowed to continually plunder and despoil our planet’s resources then among other things, the ice will melt sooner.  Much sooner.  Coastlines will sink.  Cancer and birth defects like autism caused by pollution will effect nearly every family on earth.  Already these are epidemic. Soon they could swallow our world just as the seas swallow our coastal cities.

Diet and Lifestyle Factors:  Fortunately the news from the diet and nutrition field is good news!! Research over nearly 100 years has been tabulated on the relationship between diet and cancer and is quite well established. In his book, The China Study, T. Collin Campbell summarizes the diet extolled by hundreds of researchers that prevents cancers from forming and spreading, protects us even from the worst chemical toxins, and even encourages cancer cells to self-destruct. (Click here to read Dr. Campbell's article)

Recent science has also proven that positive changes in exercise, lifestyle, and family life can effect a cure for cancer, either with or without medical treatment.  The inner healer gives guidance in these areas and gives clients the tools needed to maintain this discipline.

Subconscious Personality Tendencies: The final leg of this trilogy is addressing the underlying personality issues, the subconscious personality tendencies.   Has any cancer patient wondered if any subconscious factors or other issues or feelings could have caused this cancer?  Depression?  Loss?  Anxiety?  Traumas?  Subconscious yearnings?  An oncologist may assure you there is no established relationship between those symptoms and cancer.

And that would be wrong. Scientifically disproven.

In the 1960s I remember research was published and widely circulated about the "cancer personality".  A number of personality factors were consistently above margin of error, pointing to a clear role of personality in cancer formation. But at the time it was ultimately determined that science could not easily locate the subconscious source of these personality factors. There was also no known technology for changing personality, which everyone agreed was an immutable outcome of genetics and early environment, hard-wired in the subconscious mind.  Hard wired.  So there was no help here.

This is especially true of the technology of Alchemical Hypnosis, in which we provide every client with inner guides, including loving inner parents who create radical and immediate personality changes for most of my clients.  And an inner healer to guide them through the best possible course for their own healing.

Do you know someone who needs help with cancer? Would they or their oncologist want the answer to these three questions?  Share this article.  Please.

The problem with most of the latter research was that these studies claimed to prove (through demographic analysis of thousands of individual cases) that there were no influences from personality, from mood, from attitude or belief systems which could reliably indicate any increased statistical probability of recovery from this disease.  However, something very important was omitted in their considerations.

In a century of medical research doctors have known that up that 30% of research subjects will respond to a completely neutral substance as If it were a healing medicine if prescribed by a physician.  This result, called the placebo effect, has been a major factor in all medical research for the last century. So we know that patients will respond to a neutral substance because they believe that this substance has healing power. Thus we know that the belief systems of the subconscious mind readily affects the processes of healing.  And if belief in a sugar pill can have such power of healing attached, it is only common sense to understand that beliefs, for example, in a bright healthy future, in a life purpose worth living for, even a belief in love, God, or family could have an even more powerful healing effect!  Now we are being told that this powerful placebo effect is nonexistent in the cancer patient?  That its influence isn't even measurable?!

So the apparent results of these massive government funded research projects is clearly in violation of established scientific truth about the nature of healing and disease. It seems obvious to me that this research comes from the same camp of scientists as those who decided that cancer was caused by genetic factors.

This isn't real science. According to cancer researchers by the dozens described in The China Study, this mythology is designed by the pharmaceutical industry to stop us from understanding or believing in the healing power of our own inner minds, so that we will become more dependent on the highly toxic treatments offered by the medical industry.

Here's a research protocol for medical science if they were at all interested in the healing of cancer:  It is estimated that millions of people today have experienced a spontaneous remission from cancer or successful treatment through alternative methods.  The smart thing for a scientist to do would be to talk to these people. Find out what they did.

Lawrence LeShan, PH.D. specialized in working with cancer patients for many years.   Bernie Siegel called him "the father of mind-body therapy". Dr. LeShan's book (Cancer as a Turning Point) describes how in his long years of practice he discovered many patients were able to heal their cancer by gaining an understanding of what this disease meant for them.  By learning what this lesson was and then by changing their lives in conformity with this new lifestyle, his patients were able to conquer their disease!  Many of his clients conquered their cancer in spite of the dire predictions of their physician. Many of my clients have experienced the same kind of miraculous healing by learning the lesson from the cancer in their gnosis.

It is unlikely you’ll find an oncologist who is interested in this kind of research. In fact your oncologist is highly unlikely to be interested in any spontaneous remissions or spontaneous healings. They dismiss these stories as anecdotal evidence. I know that was my experience with rheumatoid arthritis.

Most doctors don't seem to want the facts about how to actually heal cancer. They believe research results that contradict scientific truth and common sense when they propose that cancer is a purely genetic condition that has nothing to do with your feelings, beliefs or lifestyle choices.   The cancer industry makes far too much money off this disease for a cure to be accepted.

An oncologist may have a number of valuable healing treatments for your cancer. But your oncologist is unlikely to know anything about the true cause or cure of these diseases.  An awareness of this is very important for your own recovery, especially if you want to permanently recover.  In other words: Why settle for remission if you want a cure?  Trust your own body’s wisdom. As one of my cancer clients Susan Justice once said as she faced her terminal cancer:

"My body created this cancer. And my body and I together can heal it."

She was cured and lived healthily many long years.